In October of this year, I was handed down a directive to re-read Hathor Rising and My Heart, My Mother. It had been a while since I had been given homework – and by an unknown quarter, no less!, though I suspect I know where it came from – so I didn’t immediately balk at the request.

It was around the same time that I received this directive that I had decided that I would proceed with the cycle of rebirth that I had failed to see through 3 years ago. Considering how thought-provoking and useful I had found both books during the process three years ago, I could see the wisdom in re-reading them by the end of the year.

What I wasn’t expecting as I blew through Hathor Rising was how much of the book I had actually forgotten. There were whole chapters filled with very interesting tidbits that relate in some form to either my relationships with my primary gods or to the regeneration cycle I had agreed to undertake, which were practically brand new to me.

One of the items that I got stuck focusing on for a while as I continued my readathon was about Bull of His Mother, or Kamutef. While this is an epithet that has been associated with other deities, as I will explain further below, in the instance of Hathor Rising, the author is discussing the regenerative properties of the syncretized version of Amun as Amun-Min-Bull-of-His-Mother.

As I researched the name Kamutef further, I found that Amun-Re in the New Kingdom also utilized Kamutef, who has a small shrine space or sanctuary outside of Mut’s Asheru sacred lake at Karnak, in his name as Amenemopet to regenerate himself each year.

While the information I gleaned about Kamutef, and the syncretic Amun-Min-Bull-of-his-Mother all very interesting for what I was going to be undertaking myself, it was the actual epithet “Bull of His Mother” that stayed with me as I researched. 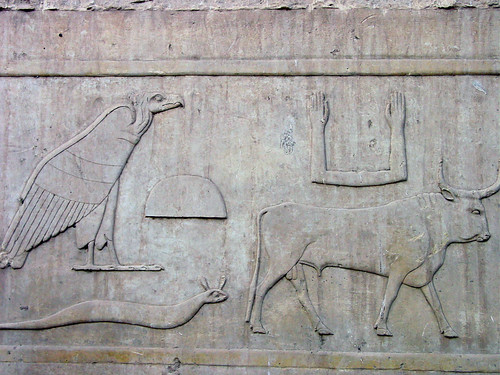 As I mentioned, I was familiar with this epithet to some extent as I had seen it in association with various Horus iterations during one or more of my previous research extravaganzas. It is through this phrase that whichever Horus we are speaking of (both the younger and the elder) assume the role of king from their father. I had also seen it, or dreamed that I had seen it, associated with Geb. (Here’s a link to a conversation about it. Trigger warning for sexual assault.)

The gist of the associations with these gods is that it is through a full assumption of their father’s role – from son to the “fecundator” of their mothers that they take on the role of king. The father and son are the agents of the rebirth cycle while the mother is a seemingly passive vessel in the undertaking. She is providing the necessary environment for the son to be reborn into the role their father has bequeathed to them.

The idea that the womb played a sort of passive role in the rebirth of the king isn’t new to me. Sekhmet plays a similar role in the Pyramid Texts, where it is her womb that allows the deceased pharaoh to be reborn into akh. It is not from her womb that they are born; merely the act of entering the womb that seems to bestow that power unto the pharaoh. (This kind of highlights, in my opinion, the idea that ancient Egyptians knew very little about the bodies of people with wombs.)

The purpose behind this assumption of the father’s role in its entirety is that it is through the mother that the son is to hope for an ever-repeating life. It is this passiveness on the part of the mother in the cycle of rebirth that, I think, is required for the son’s elevation to the role of their father. Their mother must provide a habitable environment for this ability to manifest their own rebirth cycle but she doesn’t actively take part in the act itself.

The fertility that comes through the regenerative properties of one who is a Bull of His Mother is immune to death, so to speak. The person or god in question is capable of renewing himself over and over again and in so doing, also provides the cycle of rebirth over and over again for those who have ruled before. In effect, through the assumption of this role, the deities mentioned above and subsequent human pharaohs, are able to provide ever-lasting life for not only themselves but their forebears as well.

In addition to the hints of a constant and forever sort of rebirth cycle, the incestuous relations between mother and son allowed the sons to fully appropriate the title of ruler from their fathers. It also gave them the ability to deny “linear time”; the role allowed them to change the succession of generations by writing the past and present into a single person unified person. (This concept isn’t so different from the discussions regarding mythic time.)

With the acceptance of this epithet and the role associated with it, there would be continuity without fear of facing chaos like those of the Intermediate periods with the deity or human pharaoh assuming the full role of his father. As mentioned in the entry for Kamutef in The Ancient Gods Speak: “being the father and the son possesses an unquestionable legitimacy.”

So in this way, the epithet lends credence to the legitimacy of the succession. By assuming the role of one’s father in every capacity, the new pharaoh is ensuring continuity and the ongoing rebirth cycle that all pharaohs hoped to achieve.

While this particular epithet seems to be more commonly associated with a variety of gods, there was a specific festival called the Harvest Festival that the human pharaohs would perform so that they could fulfill the role of Bull of His Mother on a country-wide scale.

In this festival, which dates back to the Middle Kingdom, the pharaoh completed a ritual that allowed them to take on this mantle to regenerate the crops of the country. He and the priests would complete a fertility ritual to ensure that the crops for the upcoming year would be abundant.

I suspect that the Bull of His Mother epithet may have in fact had more to do with the consecration of a living pharaoh’s son to take the mantle of kingship upon the death of his predecessor. Based on what I have found during my research into both this epithet and its associated deity, Kamutef, it makes sense that the “Bull of His Mother” function played a larger part than a yearly Harvest Festival.

In effect, the Bull of His Mother epithet is associated with the ability for the sons to fully consecrate themselves in the roles of their fathers. While the epithet can have negative associations (as in the case of the possible association with Geb), it seems that it is more intended as an epithet to engender the vehicle of one’s own ability to renew themselves. 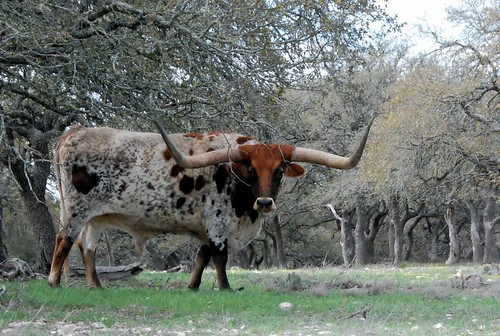 There can be no doubt as to why I found my exploration of the Bull of His Mother fascinating.

The next year is a year of death and rebirth. I have been asked to die for my gods and I have agreed to go through with this moment of rebirth. Not only will the rebirth cycle I am undertaking benefit myself, but it will also benefit my gods in the long-term. Reading about an epithet and its associative deity that is capable of engendering its own vehicle of rebirth seemed, well, opportune and timely.

It makes sense to me that, in order for me to induce my own rebirth that I should assume the mantle of the Bull of His Mother. This is an epithet, and a deity, associated with the very things that I must undertake. And it would be a benefit to all parties involved if I can use this Bull of His Mother epithet as a sort of blueprint to see through what I need to see through.

As I was discussing the Bull of His Mother with TTR, they mentioned that Mut could also prove useful. “Mut is said to be “the mother who became a daughter,” or “the daughter-mother who made her begetter,” expressing a power of self-creation similar to that expressed for Amun by the epithet kamutef, ‘bull of his mother’, meaning one who is his own father.” (Link.)

While this was an avenue of possibility that I hadn’t considered before, it didn’t feel quite right to me. For some reason, the idea of becoming a god who could help me move forward on my necessary quest for ever-lasting life during my own rebirth cycle just felt wrong. I’ve since come to the realization that for the regenerative properties I am looking for, I need to undertake the epithet of Bull of His Mother to see it through as opposed to becoming either Mut or Kamutef. The assumption of the epithet feels more in tune with what I need to achieve.

So here I am, or there I will be at any rate… Satsekhem-Bull of His Mother. I guess I can only wait and see how far the assumption of this mantle pushes me in the upcoming months as I willingly die for my gods.

Receive the crook of your Father and the flail of Bull-of-His-Mother. You are the seed of the Lord of Abydos. May he give strength entirely.

4 thoughts on “Bull of His Mother.”