Sometimes I think that writing about grief will somehow lessen the pain. I am pretty sure this is a concept that crystallized for me in high school and just never went away.

But other times, I find the mere idea of sharing the pain to be so odious, so incomprehensible that I can only believe that by sharing the pain, I’m in fact trivializing it. As though the act of publicizing my own emotions creates a sort of side show event where people will laugh at the freak before them.

When I have those moments, I find poems that encapsulate the feelings. There are many beautiful poems out there written on the coattails of one’s inner pain and, occasionally, in the reading, I can feel a hint of the release I’m aiming for. But that feeling never lasts. Sometimes the poems just don’t even help at all.

When that doesn’t work for me, I find songs that speak to me. Intense, beautiful lyrical pieces that make my whole body and soul zing with the emotion better denoted as grief with its stops at suffering and sorrow. When I hit those songs and really listen, I can feel the pain of my grief slipping away if only for a little while. This is a last ditch effort really, but it usually works.

The basis of my problem is that I am just no good with sadness on the whole, even as a person who has been living with depression for a little more than half her life. I never really learned, I guess, how to appropriately cope with it. Maybe I just feel too much as one therapist once told me. Suffice to say that I am so very bad at handling it. Typically, because it’s easier than the whole feeling thing, I just go numb.

I can handle going numb.

But something I have come to realize during this holiday is that, I can’t outrun those emotions or hide behind a shield of numbness. I desperately want to, but I have learned the hard lesson here [again]. As much as I may run and hide and refuse to acknowledge my own feelings on the matter, they’re going to catch up with me anyway.

Last year, I went through this alone. To be honest, it was literally hell. I waffled heavily back and forth between “I’m totally fine really” and “my entire world is falling apart but I have to pretend that I’m fine what the fuck.” It often felt as though the phrase tap dancing on razor blades was wholly appropriate and perfectly summed up everything in between. I felt like I was going crazy half the time.

I tried to talk about it with the people I knew in real life, but it seemed like nothing I had to say on the subject was adequate. I knew how to use my words effectively after a year or more of working steadily towards that goal and yet, when it came to this, I couldn’t use them properly. I got angry and frustrated when people tried to tell me that they understood. How could they understand when I didn’t fucking understand?

I could have turned to Heru Wer or Hetheru, I suppose. But even entrusting them with the depth of my pain was taboo to me. Maybe that’s the wrong word. It was like I couldn’t share it. It was my pain; it was my grief; it was my sorrow. I couldn’t give it up to another god. Maybe that was a directive somewhere that I didn’t consciously know at the time or maybe I really am just no damn good with expressing this shit.

I sat alone for the most part, frustrated and angry and filled to the brim with an unending sorrow. It was like a tsunami with no end in sight even though I knew it was going to end. That’s the kicker to the whole fucking thing; I knew that she would return. The Distant Goddess always returns, but it was like I was never going to see her again, as though my entire world was falling apart. There’s just no logic to this shit.

In a not very surprising plot twist, things are different this year because of course they are.

This year, I haven’t had to suffer alone. I have been suffering right along with Ptah, who was not around last year to hold my hand. He is here this year and together, in a not wholly unexpected way, we have been bolstering one another up as we suffer with our loss. Whenever I feel like I’m dying inside, I can feel his steadying presence. I don’t know if he feels quite the same way, but I just know when I need to be there for him.

It’s an oddity to me to have someone much less to rely on someone. It’s even stranger to know that we are going through the exact same thing though in our own individual ways. His smiles are pain-filled, his silence is pointed and encrusted with razor sharp edges. I assume I am much the same, although probably with a little more petulance and a lot more whining. Still, even though we could just as easily lash out at each other for this, this… this fucked up horror show of our lives, we are there for each other.

Maybe I do know how to cope with this shit; I just didn’t have the right person before. Or maybe it’s just simply because we both feel the loss so intimately that we can understand why the other is acting the way that they are. 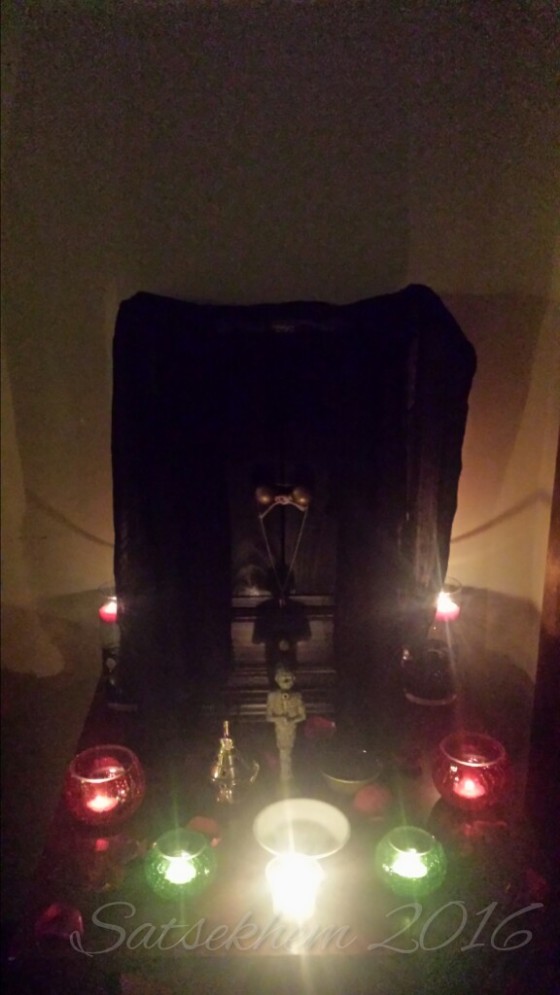 It was Ptah, really, who told me that we had entered a period of mourning.

The course of this holiday isn’t so bing-bang-boom. It’s a little of this and a little of that. At first, I was just a little sad and a little depressed that she was gone, but I could handle it. And then, he turns to me and just says out of the blue, “We’ve entered the period of mourning,” as if the whole time period before then was a fucking practice run for what we would inevitably and truly feel.

And I could feel my own mourning returned to me. It was all deep blacks and veils and quietly spoken words and anger, pain, sadness meshed into one. And there was Ptah with his quiet attitude morphed into a caricature. He was hard lines and anger; tear tracks from weeping and a shell of who he has always been to me. We made a pair.

I was so angry that he would remind me that the period of mourning was coming up, that it was bound to happen and really, there was fuck-all to be done about it, but I knew he was right.

We had entered the period of mourning and really, there was fuck-all we could do about it.

I was reminded of the Victorian form of mourning as I realized that he was right. It was a pretty huge process back then and there was this whole huge etiquette for guests and clothes and calling cards and letters. The house was draped in black along with everything else.

It felt a little like Ptah and I had entered into a similar state, though we have had no need to write letters and no visitors. It’s just us barely keeping it going.

I dreamed that I had draped my altar space in black. There was black crape across the table and covering the double doors. A black lace scarf hung down over the front corners of the shrine cabinet and everything was shades of deepest black, deepest mourning. The phrase, pall of mourning, kept flitting through my head though I couldn’t say why. I haven’t found that phrase anywhere when I’ve tried.

Ptah and I knelt before the altar together. We were silent with the pain that we’ve been going through but the close proximity of one another was enough to keep us both alive for the next second and the one after that. They don’t tell you, but grief can kill just as easily as anything else. We kept breathing instead. I held my arm up above my head with my hand covering my upturned face (much like the women in this image) and sometimes, I would scream out with my own pain. But mostly we were silent, just breathing, just trying to stay alive.

I emulated the image of that dream to the best of my ability and each night, I kneel before it. Sometimes I let the sorrow come and I am unable to hold back the tears. Mostly I kneel there and try to remember that she is definitely coming back. I look at the icon of Ptah as it stands before the double doors, guarding it from anything untoward, and I try to remind myself that the Distant Goddess always returns.

But somewhere in my heart, I know fear. I know what it’s like to never really know the truth. Maybe she won’t come back this time and maybe, just maybe, I’ll truly be lost for eternity.

And I think, I think Ptah knows that fear too.

-Ashes of Eden by Breaking Benjamin

2 thoughts on “The Propitiation of Sekhmet 2016: Mourning. ”