One of the myths that I’ve only had a passing interest in was The Distant Goddess. I know that I’ve read it once or twice, but it was also a myth that seemed remote from me. Even though I have a relationship with Hetheru – the most often cited (though I have seen Tefnut and Mehit in this role as well) main protagonist of the myth cycle – it never seemed important to me on any level to pay much attention to it. I had the bare bones about it and I felt like that was sufficient.

The other day, I picked up The Daily Life of the Egyptian Gods by the Meeks and started going through it again. The last time I read it was close to 6 years ago, maybe more, and I have felt the need to get back to basics again lately. So, I parsed through the first chapter, highlighting sections that I found of interest. The most interesting section was the relation of The Distant Goddess myth with Sekhmet as the main character.

As I re-read the pertinent passage over and over again, I could see in my mind’s eye Sekhmet in an ancient land, licking her metaphorical wounds after having been bested by the other gods. I could see her sitting calmly on a savannah – a generic savannah – and waiting for them to beg her to come back to them. I could see her just doing what it is that a lioness on her own would do and I knew what it was, for just a moment, to truly know the distant goddess.

That night, I had a peculiar dream that left me feeling bereft when I awoke:

I am sitting on the floor with my back pressed against the table that serves as Sekhmet’s altar. I have my knees drawn up towards my chest. My head is down, my hair in my face. My body feels heavy.

It is dark and not just for the curtain of my hair. It is dark everywhere both inside and out. I can feel the darkness pounding through the house as I sit there, unable to move, unable to breath.

I am alone and without succor.

When I woke up from that dream, I felt like I had lost something so precious to me. I felt as if I had been forced to bury my child or my significant other. The depression that has been eating away at me for the last few months seemed to intensify and I felt truly alone.

It was at that moment that I truly realized how much I miss the presence of Sekhmet.

When I first decided to add Sekhmet into the Wep Ronpet celebrations, I didn’t really understand what it was I was trying to do. On a conscious level, I understood the framework of what I was building. I understood the bits about Mysteries and I kind of understood what the overall goal I was aiming to achieve was. But as I was re-reading The Distant Goddess in the Meeks book, I recognized that I didn’t know a fucking thing.

As I try to get back to what it was like last year, I realized that I was pounding through the experience as quickly as possible. I was in a rush to get the foundations laid so that she and I could disappear from one another’s lives for 5 weeks. Our relationship wasn’t very good at that point and I was still bucking like a bronco at the feel of her claws around my neck whenever I was able.

I was in too much of a hurry to do any real thinking on what I hoped to achieve as a long term goal. Truth be told, I don’t honestly think I had any long term goals in mind. I think I was just trying to escape from the insanity that had become my everything when it related to Sekhmet. I needed an out. I needed to get away. I just wanted to run away and hide from it all.

She let me go into this with the notion that this was a vacation, knowing full well that I would either grow up or I would fight against whatever she would tell me.

I don’t talk about it much but Sekhmet is willing to give us the rope that we need in order to figure things out on our own. The length varies depending on the circumstances. In my case, I had a very long, long rope and it took me a year to figure out what to do with it.

We may hate this as devotees of hers, wanting her to hold our hands to see us through even when we fight back against the hand holding. (Who said relationship building with the gods made any sense?)  We may not realize that the rope is there, but it always is. No matter how cloying her presence may feel in our lives or how distant she may be from us, the rope is always there. We can either use that rope to pull ourselves out of the pit or we can hang ourselves with it.

I chose a fantastic blend of both and she let me. 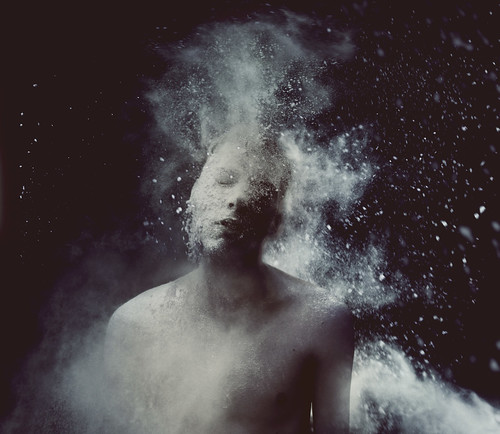 I find myself haunting her altar space, trying to figure out how all of this relates to me, how I can handle the blank space deep within my ib that is empty. She has taken the best parts of me and left the dregs behind. I feel inferior and unable to cope with the blankness deep inside. Everything hurts again, a pain that I am both familiar and not familiar with. It’s almost like she gutted me when she left, working her brand of heka to keep me alive until she returns.

I keep looking around,  hoping that there is some road map that will teach me both how to handle her absence. I keep winding up on support group websites, reading about others’ grief. It’s not the same though. My grief is profound and heavy; it tears apart my bones. I feel it in the marrow, in the blood, in the pieces of me that her disappearance has crafted.

I can feel it like a drum beat just beneath my skin. It’s loudest at the temples of my head, an unending scream that would outlive Edvard Munch’s painting of the same name. The pounding in my head and the sorrow at her absence is enough to drive anyone crazy.

That’s the point, though, isn’t it? She is supposed to be distant from me; she is supposed to leave and to come back in her own time,  and I am supposed to sit here waiting, sitting vigil in her absence with my grief. My vigil is pain filled and harrowing. I feel like the rise of a new day is a miraculous moment that I must share with her, but she is gone. I feel like the simple fact that I breathed through yet another night with her still missing is a miracle, something to share with her, but again she is gone and I am alone.

I keep returning to The Distant Goddess myth, in the hopes that I can learn how to lure her back home. I found the pieces about Djehuty going out to her, tempting her to return, and I read the bits about Shu who did likewise. Neither piece fit into my haphazard diaspora, nothing worked into the puzzle that this self-made mystery is about.

How can I possibly lure her back to me? Do I trick her? Do I tell her the truth? Does the truth outweigh the sorrow infused in seven years of our love-hate relationship?

I need her. I am nothing but an automaton. I am lost without her. I can feel the moment of her leaving, the second that I broke into a thousand pieces, and I know that this isn’t enough to bring her back. I am alone and lost, hoping that one day she returns to me.

5 thoughts on “The Propitiation of Sekhmet 2015: The Distant Goddess.”