When I was reading The House of Horus at Edfu by Barbara Watterson, I discovered that the celebrations for Wep Ronpet went much longer than I had realized. I had always thought that it was a six day long festivity: five days for the birth of the children of Nut and Geb and a single day for the actual new year celebrations. The day after the new year, the populace went back to work and the world was reset and everything was as hunky-dory as it could get.

Evidently, at Edfu, they celebrated WR for 9 days and there was reference to other places that continued the celebrations up to 11 days after the start of the epagomenal days. That kind of made the panic in my chest slow down to a crawl, which was nice. I always have a lot of ideas about what in the world I plan on doing during the celebration of Wep Ronpet, but I never feel as though I have enough time to see it through. The knowledge that these types of celebrations were a few days’ long made it possible for me to see to everything I wanted to see to.

The sun just touched the morning;
The morning, happy thing,
Supposed that he had come to dwell,
And life would be all spring.

– The Sun’s Wooing by Emily Dickinson 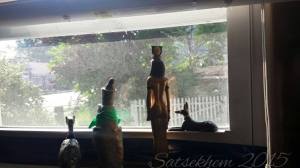 I have a love-hate relationship with the sun. I’m not a morning person, although I’m not usually cranky after my first cup of coffee has been ingested. Some mornings, I sit and watch as it climbs above the trees outside the window, marveling at the majestic beauty. Other days, I wish it to be covered with gray cloud cover, a hint of rain on the breeze heading in my direction.

The morning of the 30th dawned bright, though, and I didn’t feel like the rejuvenating rays of Re needed to be covered. After I felt awake enough to see it through, I brought all of my icons, excepting Sekhmet of course, over to greet the dawn. I tried to imagine what it must be like to sit and feel the sun’s rays, feel it renewing me just as much as it must have been renewing my icons. This was something the priests did in antiquity – bringing the sacred icons out to greet the sun. But I have to wonder if, besides all of the pomp and circumstance, did they try to imagine what it was like to be renewed too?

When I went out to see to my dog that morning, I closed my eyes and turned my face to Re. I don’t know if he was inclined to give me a bit of his power, but it felt good. I felt like I could feel it working its way into the pores of my skin, giving me a little added boost for the days, the months, the year to come. Maybe he did give me a little added bonus. As I opened my eyes and turned toward the house, ready to get on with the day, I swear I saw the icon of Djehuty wink at me.

Last year, I created a sa for my car. I had decided to make it before I got rid of my rusty Oldsmobile so the original intent was because that bucket of bolts was in the middle of its final death cries and I needed it to last a little longer. But just before Wep Ronpet last year, I bought Karen who was in much better shape and didn’t need as much gas to fill her. I decided that just because I had bought a new car didn’t mean I couldn’t make myself a sa. One should always be mindful of the needs we have for keeping ourselves safe.
This year, I decided to create another sa which will go into the significant other’s car. I didn’t really tell him I was doing this until the day before the intercalary days began, “Oh, by the way, I’m making you an amulet of protection for your car because you clearly need it.” He asked me why and I just kind of stared blankly for a minute and said, “Well, it’s as demonstrative as I can be at the moment with my affections. Don’t ask questions. No, you don’t have to hang it from the rear view mirror like I do.” 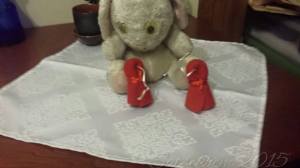 When I made my sa last year, I had chosen to use red felt (red being a major power color) to create it. I was looking more for durability than anything else. I found it difficult to force the felt into the shape that I wanted, but with slowly lost patience, I managed to get the shape I needed. I swore then I would never, ever do this with felt again but since I needed to retain durability and I knew (or vaguely remembered) how to make my fingers force the thing into the shape I needed, I figured I was okay.
The SO’s sa is a little thinner and a little smaller than the original. I had unmade the original amulet to follow its steps as well as to recreate the symbols I had drawn inside. I annointed each symbol with some crown of success oil. I then rolled them up, cursed quietly under my breath while I tried to get the silky cords to do my bidding with clumsy fingers, and then managed to tie the beasts together. Professor, in his Aspect as Maurice the Netjeri, has been looking over the amulets and helping me to charge them, to keep them filled with their purpose. (Guide to make one yourself.)

Over the months, I’ve managed to create a lot of heka for various reasons. Some of it is for myself, but most of it is for friends and family. A lot of the stuff in the pot is months old, waiting for the moment where it can be released and set free. I have a very large, old, and ornate jar that I keep my heka hut works in and every year, I try to burn it all. Last year, I found it difficult to do so because there was so much of it and because it was all folded paper. I decided to write out heka on strips of paper, hoping it would be easier to burn.

I chose to do this at my in laws’ house for a variety of reasons. With there being so much to burn, I’m finding that my little cast iron pot isn’t large enough. I also find it irritating to burn things while the bar across the street is hopping or my neighbors are home. I don’t really feel like answering questions. The in laws have a very private back yard with a burn pit anyway. So, I took the jar and Professor in his Aspect as Maurice the Netjeri on over to get everything settled in and burned.

This may be surprising, but I’m not very good at the fire bug thing. I actually had to have the SO light everything up for me. Once he managed to get it lit in multiple places, the flames took over and I just watched as everything that required destruction was destroyed. I got eaten alive by mosquitoes but it was pleasant just sitting in the heat and humidity of the evening, a slightly cooling breeze coming in off the pond in the back, while everything was burned asunder.

I not only fed the heka hut accumulation into the pot, but I tried to feed it my newly minted depression as well. I received some… not good news after work on Friday. I’ve been job hunting at a particular place, but I can’t start off with a full time position evidently. That’s not how the company works and I began to feel like a listless asshole, stuck in this hell hole that I’ve been working in for two and a half years. I can just see the months of hell stretching in front of me before I break down entirely, destroyed and defeated by this place.

My mental health, or so I’ve been informed, is important. And because I know that I could get into this place easily, I chose to throw all of my hopes into a single basket. Well, unfortunately, my hopes were shattered. I realized while I watched the flames dance in the night that I needed to stop doing that. I also recognized that I needed to stop feeling sorry for myself, but it can be really hard to do that when you’re primed for it.

I didn’t do anything on Saturday. I rarely feel like I can just take a day off and not bother with anything. There’s usually offerings to provide in the morning or cleaning to do in the afternoon/evening. But on top of feeling sorry for myself, I also somehow managed to wrench my knee in a very unpleasant way that I was feeling all the way into my bones Saturday afternoon. So, I chose to spend another day of the WR celebrations sitting around and reading Chapterhouse Dune.

With the final day of my celebrations (I can handle 9 days, but I think 11 is a little overboard personally), I decided to do a large execration against A/pep. I haven’t done one in a while and I was due for one. I had also indicated to Sekhmet before she closeted herself away that I would at least consider it and do something A/pep related while she was away. This is when owning Ancient Egyptian Magical Texts by J.F. Borghouts comes in handy because I didn’t have to figure out what to do on my own or make something up on the fly: I chose to utilize spell 144.

It’s a little weird to use some of the older spells. I’m not talking about the ones that call for crocodile dung or other seemingly weird ingredients. It’s mostly the wording of the spells. I gets the point across, though, and it actually has given me a seemingly better understanding as to what could be considered heka with a purpose, or heka hut shenanigans, versus merely paying attention to what words I’m using when I speak aloud and/or write something down.

But I stumbled and I mumbled. In the end, though, I felt like my representation A/pep was good and destroyed. I flushed the remnants into the abyss that is the public sewage system and reminded the pieces that they were destroyed; they were less than nothing; I had not only survived the battle but won.

I won the battle over this last year.

I know I will succeed and win the battles over the upcoming year.