I stop a lot and marvel at my hands.

They seem awfully small to rebuild anything.

The nails are chipped and cracked. I paint them only to wait for the days when the polish is mostly damaged because I feel like that time best represents my hands. I wear rings every day and there are cuts around my cuticles. The lines in my palm grow deeper everyday. I have healing cuts on my fingers and on my thumbs. They are busted and probably ugly, but they are mine.

They seem like such pitiful things to be used to recreate a fucking thing.

It amazes me that these two appendages are supposed to do all of these things. How, I ask myself as I marvel down at them.

There is no answer as yet.

The rebuilding of one’s soul starts with the core components of who we are, but what if we do not know who we are? (Image by Jason Rogers.)

The first week of the Reunion was a constant lesson in balance and patience, of which I am pretty sure I have very little. It was like a field trip of sorts that I had semi-invited myself along on but it was okay because I had parental permission before we left. That first week was a stretched out eternity dedicated to the needs to the gods. I remembered how much I didn’t figure into things.

The second week of the Reunion was about how much I did figure into things. It had nothing to do with the gods, dedication or otherwise. It had to do with a reunion of sorts, but mostly of the endless climb into the reaches of the atmosphere as I slowly but surely lose my mind, bit by bit. I felt less like I suffered from exhaustion and more like I was being burned alive.

No one thought to mention that the brick and mortar I had to use to rebuild myself but also to build up to new levels of my personal religious shenanigans had to be crafted by me. I guess this is what I get for not reading the fine print. It occurred to me on the first Thursday of week two that the reunion I had just celebrated was a sort of blue print of sorts, but I had to get all the fixings together in order to recreate the objects I was trying to build back up.

That shit is hard.

I spent much of week two feeling very out of sorts while I shifted around and dithered about things. I made some hard decisions, which later felt wrong and I went back on them. I made some less difficult decisions, which I felt much better about having made them. I sat up and looked around, realized where the pieces were missing and what I had to do in order to vault over the deep chasm of my soul. I don’t have all of the pieces in place – I’m sorry, but building people doesn’t happen in a single day, much less a single week in this house hold – but I have enough to feel at least partially comfortable with the process.

I just wish I had figured there was more to the story than what I was seeing originally. 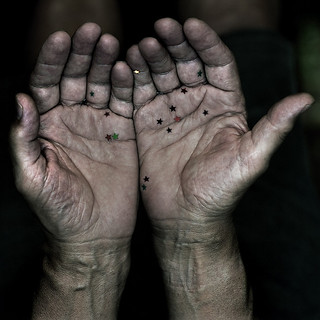 A few more pieces to give vague outline; but how does one build up and out when the destruction is wrought on the inside? (Image by Alessandro Villa.)

I came to my senses about a lot of things during that second week, but a lot of it was little things that, upon reflection, don’t seem like a whole lot. I guess you could say that they all add up to a lot but it doesn’t feel like that. It feels more like tiny little crevasses in the skin of my hands, growing deeper and thicker as time passes. They were always there, but time molds and changes them. It’s not noticeable daily, but it is if you stop and look hard enough.

Building a human being out of the soft clay like Khnum does at his potter’s wheel is a difficult process. As TTR pointed out over on Tumblr, Henadology’s entry on Khnum states: “Khnum’s role of fashioner of the bodily form was not completed once and for all before birth, but continued throughout life.” I’ve been thinking about that a lot, especially regarding the last week of the Reunion.

I am not complete, not by any stretch of the imagination. I honestly have to ask myself if I will ever be able to look at the processes that I have begun in an effort to both better myself and to work on past traumas and realize that I’m “done.” I don’t think so. I think I will always need to continue the fashioning, and like Khnum, I will be constantly working towards the goal of uniting the different aspects of myself.

In same vein, I have often assumed that I would get a “functional practice” together that would be something that I could, maybe, pass on to someone one day. I often thought that the overall goal I was aiming for was a tab-A in slot-A approach; very simplistic from a distanced point of view, but the point is really that I was hoping I could easily create and one day go, “Ah, yes, this is ready now to be born anew under someone else’s guidance.”

Just looking at the years that this blog has existed should have probably made the above obvious, but I can be fairly dense when I want to be.

In both cases, the fashioning of myself and of my practice, I’ve come to conclude that there are changes on the turnpike ahead of me. Those changes aren’t necessarily for the betterment of myself, but for the processes I’ve been going through. Like the souls that Nut swallows, I am being masticated, swallowed, and digested to be remade. The only thing is that I will be constantly going through this process. So, too, will the practice. There doesn’t seem to be a finish line in the distance just the overlong journey as I wander around, hoping that I’m not fucking things up completely.

2 thoughts on “Festival of the Beautiful Reunion: Week Two.”