One of the most important recurring themes in ancient Egyptian cosmogonies is the eruption of the primeval mound, or benben, into existence.

In Hermopolis, the Ogdoad merged to form it. In Heliopolis, Atum[-Re] comes into existence and sits upon the mound to create Shu and Tefnut. In Memphis, Ptah is associated with the mound in his associations with Tatenen, who personifies it. The city of Thebes was thought to be the place of the primeval mound.

But these aren’t the only aspects in which we find the primeval mound popping up, either. Outside of Edfu, there is a place known as Wetjeset-Hor. It translates best as “the place where Heru extolled.” To me, this seems clear: this was thought to be a zone of pre-creation, where Heru landed upon the benben and extolled creation… probably in association with his form of Ra-Horakhty. Or maybe there’s more to the elder Heru’s genesis than we know.

In either case, it is at Wetjeset-Hor that Hetheru and Heru come together for the first time during the Festival of the Beautiful Reunion.

The meeting of the two at Wetjeset-Hor has manifold implications. As the place where life began, it is a sort of cosmological meeting point between the seen and the unseen. I read up a bit on the place and it seems like the beginnings of the Temple of Edfu began there. Egyptologists have found pieces of society dating back to the Old Kingdom and even during Pre-Dynastic times. The import isn’t lost on me in that respect at all.

But I think the symbolism is more than just mere creation. I think it speaks of renewal and regeneration, two items that are so often intertwined in ancient Egyptian belief systems that it can be difficult to do much more than mention it.

As I was reading what I could about this place, I thought back to the Ancestor Ritual that is discussed in My Heart, My Mother by Alison Roberts. I was thinking, specifically, of the bits regarding the bull’s heart.

A heart is offered to the gods as a symbol of vitality and life. It pulses with the very breath of our lives, filled with the very essence of who we are. In the Ancestor Ritual, the heart is offered up as a physical representation of all that the son has become not just in his own right but in his merging with his mother.

But by virtue of sexually uniting with his mother, Horus has indeed taken the place of his father in every possible way. He has become a ‘Bull-of-his-Mother’, capable of perpetuating an unending cycle of regeneration through the heart. And incestuous though this union of hearts may be, it encapsulates the mysteries exchange of life energy necessary for the empowerment of the new ruler. Though Osiris has gone to his Ka he remains actively supporting his son, who now embodies the procreative powers of his predecessor. (p.77)

The similarities between the triad of Wesir/Aset/Heru-sa-Aset and the triad of Ra/Hetheru/Heru-Wer is not lost on me. And I think that is, above all else, why this particular part of the Ancestor Ritual came to mind.

It is the meeting place at Wetjeset-Hor that makes me realize how similar these two triads really are. And it is by virtue of this meeting in the first place of creation, at the primeval mound of that creation, when the greening of their hearts truly comes to be. As hethert-dot-org says, “It is appropriate that the meeting of Het-Hert and Heru occurs at this holy place, because the fruit of their conjugal union symbolizes new life, fertility and regeneration.”

I think the meeting is very much like that heart – the seat of everything in both my practice and of tantamount import in the unseen and afterlife – being offered up to the gods. 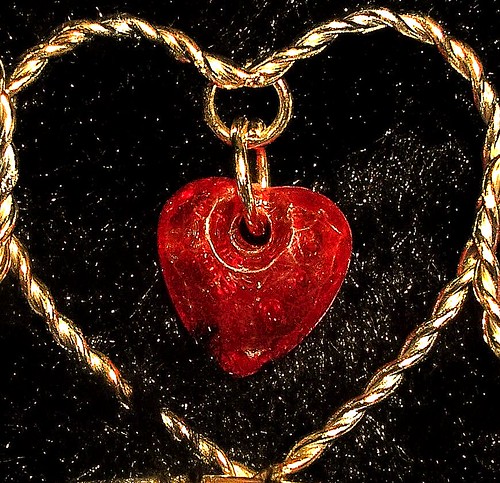 Sometimes my ib chokes me with the weight of it. And other times, it is a comfort about me. (Photo by Mustang Aly.)

At Wetjeset-Hor, I provided so many offerings. I laden the plates with everything, throwing confetti at the two statues in the shape of hearts. If nothing else, it’s a bit like Valentine’s Day for me. Only instead of celebrating hearts and love with people, I’m celebrating it between two deities who have made profound impacts on me in so many innumerable ways.

After, I divined to see when it would be best to finish the journey to Edfu proper. According to what I had read, this was done. It makes sense. Sailing on the Nile could be a nasty business and no one would really want to lose two major icons. It would be quite inauspicious, no? They spent an entire 24 hours at Wetjeset-Hor, surrounded by hearts and love and offerings and more love.

Perhaps the reeds have been planted in their hearts, too, and new life grows in the union between them. It’s probably only my life, to be fair, but at least it grows.