I feel like I live in a world surrounded by my own bewilderment. (As someone pointed out to me recently, I clearly chose a very accurate blog name.) As bewildered as I am, I am also very tired, very worn out, and above all else, very much in the middle of a full blown arm flail.

I’m just really tired of it all.

A few months ago, I started getting a lot of hits about rebirth. Personal divination aside, it seemed like the word was haunting my every move in both my waking life and my sleeping life. I suspect this related back to the river. I kind of figured the river would have something to do with going through a sort of transformation, so it wasn’t really a huge deal all things considered.

The thing about rebirth is that, usually, it’s warranted in my experience. It’s something that we, as human beings, have a need to go through periodically. It’s not quite a reset, so to speak, but more like an evolution. Maybe it’s like shedding skin, like snakes do. We’re still technically who we were before the process began but at the end of it all, we’re just a little bit newer, a little bit different than we were at the outset.

Looking at myself, I felt it was about time to shed some skin.

I started seeing a lot of star and galactic imagery on my dash after the river fiasco, but it wasn’t wholly shocking or anything. Stars seem to be a pretty big motif on Tumblr, but the thing was that it just seemed to come on a little too strongly. Like, blogs that wouldn’t normally reblog things of that nature were reblogging things of that nature. I created a series of snarky tags to keep track of the happenings. Around the same time, I began reading My Heart, My Mother by Alison Roberts in depth, with highlighter for all of the interesting bits and all.

The star imagery started to pick up and then, I got to the chapters about Nut in MHMM, which seemed to kind of coincide with the star imagery slowing down. Synchronicity and a keen awareness of such things made me aware of this; believing that seeing some star pictures on a computer screen doesn’t necessarily correlate with one’s religious life prevented me from doing anything about it.

Then the dreams began.

I am very in tune with my dreams. I know what a typical dream scape, for me, happens to be. I know that this is not the case for everyone, but it’s something that I worked very hard on over the years. As a teenager, I was very interested in dream interpretation, which is partially why I created such an in depth dream lexicon. It is based on this that I know when I am dreaming and when I am Dreaming. I was definitely Dreaming.

It started with a false door, which I seemed to believe would be an excellent addition to my akhu altar. After getting sucked through the false door and having to battle zombies (I don’t fucking know, man; you tell me), I re-thought that idea and have since jettisoned it into the sun. I have to say that I think it was going through the door that started all of this.

And it makes a lot of sense, though. Rebirth and transformation aside: you have to have a starting point. And as we know from ancient Egypt, false doors were a way to maintain a link between the gods and the deceased with the living on earth. It makes sense that everything would start at a door and even more sense that the beginning of my own rebirth cycle would be the very thing that was needed to maintain the link with the Duat. It makes a lot of sense, but that doesn’t mean I have to like it.

I got sucked into Nut’s mouth. Her face was wrought in gold and her eyes were on mine. I watched as her mouth opened up and I got swallowed into the deep maw. I don’t remember much after that except that it was dark for a while. (No chewing; no halitosis; no tongue.) I woke up wondering what the hell that was supposed to symbolize…

But learned soon enough because MHMM ended up going, hour by hour, through the Book of Night. The book seems to indicate that I was at hour 2 and this is regarding the renewal of the body. After reading about the first hour, which I wonder if that correlates to either getting thrown into the river or going through a false door (with no idea specifically how it may relate, if at all), I have to admit that all of this sounds suspiciously like an act of renewal, regeneration, transformation, and rebirth.

Knowing what the plot is about is all well and good, but it didn’t really help to explain the goal beyond, “rebirth.”

Then I ate a heart.

Khaleesi jokes aside, this dream made me realize that something was really going on and I should probably pay attention. I was in a gold room with a red, velveteen curtain and I was sitting cross legged in front of it. There was a gold plate with a bloody heart in front of me. I looked blankly ahead and put it into my mouth. I ate the entire thing.

I’ve thought about whose heart it could have been – mine, the gods, some random stranger’s, etc – a million times but still no answers. I keep coming back to the part in MHMM prior to entering the Book of Night section when the author is discussing the Ancestor Ritual. There is a section of that ritual in which a bull’s heart is provided as an act of renewal and vitality. In that part of the ritual, the provided heart is given to Heru and it is through this ritual act that the son has truly become one with his father, taking on the epithet Bull-of-His-Mother to symbolize that he has taken the place of his father in all things.

Jokingly, I decided I had clearly been given the epithet Bull of His Mother. As far as epithets go, it’s not a really bad one, but it doesn’t really explain the point behind any of this. Well, to be honest, none of it really explains what the hell is happening.

Everything began to get hazy and disconnected. Everything was all pointing to rebirth but nothing was telling me what the point in the rebirth was; I was getting really frustrated.

I had dreams about Hetheru. I dreamed about the gold room with the red curtain, only this time someone in a shiny triple atef crown was there and I was kneeling in front of them. I dreamed about Heru-Wer and Sekhmet. But all of the dreams were disjointed and I knew that they had to get added to the “this is probably actually happening even if you are denying it all” list but that didn’t mean I was happy about it.

As if not understanding my dreams wasn’t bad enough, my divination attempts kept pointing back to the rebirth and transformation theme, but nothing was clear. I felt like I couldn’t trust a damn thing that I was reading.

What frustrated me the most, though, was that I couldn’t get a bullet pointed list of what to expect or what to do. My dreams were hazy and painful – everything ended up making me feel worse inside as though I was bleeding internally and no doctor could help me fix the destruction wrought on the inside.

It was like a 100-piece puzzle that I had only 20 pieces for and none of them were lining up. As if things weren’t already hellacious enough to me, my favorite band (Fall Out Boy) came out with a new CD that I was finally able to purchase. I began getting those sort of mysterious pings deep in my heart from various songs, things that make you sit up and notice.

I began to feel less like the snake that was shedding its skin and more like the husk it was shedding. I began to feel dried out and used up. I was/am always tired and always cranky and always freaked out that I’m making everything up. I feel as if I am on the verge of a catastrophic collapse, that moment when the bridge supports fail and everything goes crashing under the disinterested hand of gravity.

I feel more in tune with snake skin, the shed remnants of a life’s totality, than I do with anyone or anything around me.

And above all, I feel so very alone. 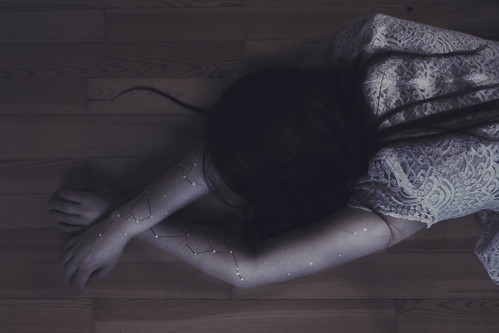 I can feel the constellations like wounds upon the skin, bloody and raw. (Image by Annaheim Kreiter.)

I’ve looked back over and over again. The pinpricks of light are clear to me now and I can see the outline, the shape of the constellation that I am supposed to become. I think I understand to a point what has been happening but I couldn’t be sure.

I have moments of such intense emotional backlash from all of this, even though it doesn’t seem like much to an outsider. But that’s the thing: when you are being forced to change on a fundamental level, when the gods are pushing you to points well past your usual endurance, it doesn’t matter what the method or the mode of those pushes may appear to look like to an outsider. They still hurt the person that is going through them.

7 thoughts on “The Constellation of Rebirth.”