We descend upon the darkness and my breath is robbed. Before us, there is infinite blackness. It is inky and violent, soft and tender. The aching sweetness mingled with the heart-stopping fear is too much. I can feel a part of my shattering into the night and I am lost. I was lost the moment we came here, but he knew that would be the case. Without breath, without more than an instinctual need to move, I step forward. My steps are sure though I can see little beyond the brilliant pinpricks of star dust above us. It shimmers in my eyes and lights my veins on fire. The only way to make it quiet is to step ever forward into the gentle riverine whispers before me. I must quiet the storm in my body.

Weeks ago now, I began dreaming about Osiris. I was not pleased upon waking from that first dream to find imagery of that green-faced man in my head. I complained and whined about it. This was my fault, though, if the dreams had even a modicum of truth. I had decided it would be a good idea to break into Big O’s palace with some foolish intent on finding TTR, one of the few people whom I would like to meet in the unseen. My plan backfired, of course, because I was caught breaking and entering. I spent a few days having a staring contest with Big O, which seemed to only cause me more consternation. What the fuck had dream-me even been thinking?

A few days afterward, he brought me into the bowels of his palace. We passed through a door and into a landscape that I feel I have described poorly. The starkness of that landscape causes chills up and down my body. Just remembering the black sand beach, the barren rocks, and the scrub grass in shades of charcoal, brings me back to that moment. Before the two of us was a single swath of water, quiet in the stillness of this place. While my poetic endeavors would have people believe that I willingly and quietly went forward into this moment, anyone who actually knows me will understand that I was neither.

I was actually pretty pissed and made my feelings on the matter quite clear. I chose this moment for brashness but that was mostly because of my fear. Of course, I had read about a similar scene playing out so I knew what was coming and I knew what the end result would probably be. I also knew that I could go into the water willingly or I would get tossed in with a little less ceremony, a lot more hilarity (not mine, of course), and a lot more anger and sputtering (mine, of course).

I chose to do what I had been brought there to do willingly, but that hardly means that I was pleased with the overall idea.

With probing fingers, the darkness pushes me ever forward. I feel as though there is no choice in the moment, as though my will has been robbed of me. In a matter of course, it has been, but I also know that it will always come down to this. Eternity is a long time to play this game of cat and mouse; I am too tired to keep playing. The whispers of that river call out into my soul, whipping the storms in my veins into a frenzy. I want to cry. I want to scream. I want to yell. I want to not drown again. My fear is all around me, beating at my body like a bird’s wings but its intent is nothing more than harm and horror. I relive the moments of my death, that painful frightening death, as the water sucks greedily at my toes and feet. I don’t want to die. 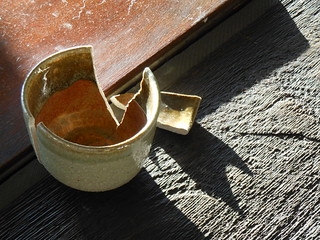 Sometimes breaking something, even though it seems like the worst thing in the world, can be to our benefit. It’s a matter of discovering that benefit later. (Image by Joanna Bourne.)

I went down deep and let the water quiet the wildness within my veins. It seems to poke and prod at every hidden portion of myself, not just my physical body but the metaphysical body that houses the pieces of my soul. Water can be both healing and destructive, but healing and destruction can go hand-in-hand. Though the touch of the water was gentle in a way that I can’t fully describe, the end result I have to admit is that I came out of there broken.

I went in with my ib relatively intact. It was taped up, glued up, shot to hell with the mistakes of its fixing covered in white-wash. But the truth of the matter is that it was a mess. It wasn’t anything to be proud of. The river’s focus was to point that out to me.

As I lay in that water for what felt like an eternity, I ended up realizing that it was removing bits and pieces that had been added from other portions of myself, pieces of myself that had to be removed, cleaned, and destroyed in order to heal it. The removal of those pieces left me fractured and raging. I had been trying to build a tower out of pieces that didn’t actually fit together without any instructions. And now, I was being informed that I had to start all over.

It seems rather unfair.

I crawl from that watery embrace, coughing out the destruction in spades. The fire within my veins, the storm within my soul has softened its touch; it is a tender rain upon my insides. I fall onto my face and cry for it all. The destruction that had raged within my body had been destroyed or at least quieted. I could feel the tender bits of my heart quaking as it felt for the first time in centuries. I roll over and stare up at the brilliance of diamonds in the sky, wondering if it is possible to join them now. Though death has not taken me and I am nowhere near ready to be changed into stardust and memory sparkle, I am too defeated to do more than breathe.

I’m left wondering if I had a map to all of this and I somehow left it in my other pants. Or if not a map, then maybe I could get some form of instructions on where I’m supposed to go with this progression. I’ve been informed, more than once, that Big O speaks in wing dings though. This particular moment seems to more than qualify for that. Even looking at others’ experiences with their personal rivers and looking to the bits and pieces that I know about Big O, I keep coming back to that moment when the fire in my blood stirred to a boil before the heat was lowered to a simmer. I can remember feeling it as it lessened until I was left cold, alone, and gasping for breath. Everything points to a moment of rebirth.

The cost of rebirth is pretty high and no one asked if I was willing to pay the toll. I should be a little used to this turn of events; I seem to rarely get asked if I’m willing to pay for what’s being done. The problem with rebirth is that it means a bit of you – large bits or small bits – have to die. Death is a part of living; living is a part of dying. What I always expected was that death was a little more black-and-white, even though I constantly go on about shades of gray and even though I know consciously that this perception isn’t true. I thought death was the finality, not the beginning of eternity. This was just another way to die, if only a little calmer and maybe a little more relaxing than other ways.

The thing is that even though I’ve paid parts of the debt that the process has demanded, I don’t know if I can finish the payment plan. I’m being asked to craft my ib from start to finish. The parts that were removed were for me benefit, for the good of the entirety of me. This is about bigger picture, but the bigger picture isn’t community, isn’t interpersonal deity relationships, isn’t friendships, isn’t romances, but is about me. I was important enough as I blazed a trail of fire and brimstone behind me to be stopped, to be taken aside, and to be forced to look at the fact that what I had been doing to craft a representative ib was insufficient. Now I have to build a new one from scratch, using tried and tested pieces that haven’t been destroyed by my own inability.

The thing is… these hands look awfully weak to undertake such a task.

My demise was granted yesterday, I have returned today, I have gone forth in my own shape; I am tousled…; I am disheveled, having gone forth…– excerpts from Spell 179, The Book of Going Forth by Day translated by R.O. Faulkner

I think that if I keep telling myself what the end game is, then maybe I’ll be able to get through it. I tell myself, “I want to shine and sparkle, I want to roar with my power, and I want everyone to know who I am and not the person that they think I am supposed to be.” But I have to admit that there are some serious side effects to dying, even if it is only a little death. I haven’t quite mastered the side effects and I honestly don’t know if I care to try. I keep trying to point out why this is important, why I need to get going, and why it’s something that I need to do, but I’ll be honest: the gray cloud of my existence is kind of addicting. I’m not sure if I really want to remove myself from it at all.

But the real problem, the larger issue out of all of this is that I just don’t know how to build the ib, the soul, the person into reality and not the ephemeral dreams of smoke and mirrors. Without instructions or an idea, I don’t know if it’s even worth starting all that hard work.