I kind of feel like this is every experience I’ve ever had over there summed up in one 60s fabulous Spider Man meme.

Two years ago, I felt my mind start to shatter a little bit at a time. I couldn’t understand it at first – I didn’t recognize it for what it would inevitably turn into. The thing is that so few people actively talk about having their head cracked open. I mean, sure. I read TTR’s blog regularly and I’ve combed through almost every entry that has ever appeared about having a broke open head. But you know? I just figured I was the girl who sat on the sidelines and nodded at all the good parts, made commiserating noises at the bad parts, and made sarcastic remarks during the in between.

My head wasn’t supposed to crack open. I wanted to have a broke open head because, honestly, I didn’t recognize or realize what it would entail. Reading blog posts is fine and dandy, but it still doesn’t quite get across all the fucking bullshit, responsibility, and fuckery that comes along with having your head cracked open. It’s that whole “grass is always greener” syndrome. Just because the grass looks greener doesn’t mean it really is greener. Honestly, looking down, I have to say the grass looks decidedly dead and brown.

That’s the thing about perception though; the only one that matters right now is my own.

So you know, the months passed and the crack widened. I honestly thought it was a good thing and maybe, back then, it was a good thing. It started off as a steady trickle, you know? It’s kind of like how someone had turned on a faucet, but it was only just dribbling out. I would have random moments feeling like I was in two places at once or odd dreams that I couldn’t really explain away to subconscious mind bleed through. It all seemed cool.

As I began to realize what was happening to me, mostly through interacting with spirit workers and paying close attention to messages/dreams I was receiving from the netjeru, I worked hard on opening that little hole in my brain wider. The point was so that I could work appropriately and conscientiously on the things that needed to be done. For about three to six months, I did everything I was instructed to do as best I could – I mean, let’s face it, I’m no more for deadlines than Douglas Adams was – before I learned my first major lesson about having a broke open head:

The trust of the innocent is the liar’s most useful tool.– Stephen King

You see, I went into the whole business of having a religion with the mindset that the gods can be trusted. I don’t really know where this mindset came from. It was just there one day when I was doing my thing. I trusted and I trusted foolishly, blindly.

But you know, now that I think about it, I have to admit that I am a blindly trusting fucking idiot. I always have been. I can look back down the years and see all of the little things that could have added up to me not getting hurt in relationships and friendships – things that I completely fucking ignored because I trusted the person not to hurt me – and I suppose you can guess what ended up happening. If not, I’ll give you a little hint: I got fucked over.

As if I hadn’t had it happen often enough with human relationships, I got to learn the lesson again with gods. I have to admit that it was pretty fucking jarring to get fucked over by a god. I mean, looking at the situation as objectively as I possibly can… I can admit that in the grand scheme of “you got fucked over,” this was pretty minor. But it opened my eyes enough to make things that much harder as the crack widened and yet more fuckery and woo came flowing on down the sluice way.

I can’t honestly say if the lesson stuck. Or maybe I just assumed that my gods wouldn’t fucking do that to me because, that god was just hanging around to get some shit done.

Sometimes, I really laugh at my own naïveté…

As the gates began to open more regularly and remain open for longer periods of time, I got more lessons. A lot of them were personal and painful. I don’t think I can fully explain to people how painful or even how personal. It isn’t just a matter of working on some things that have been sticking with me because of things from when I was a kid. Oh, no; it couldn’t be that easy in the slightest. The pain-filled lessons have had to span centuries and numerous lives until I was dizzy from it all. My second major lesson in all of this has been:

It takes considerable knowledge just to realize the extent of your own ignorance. – Thomas Sowell

What I realized as I really started paying attention to the numerous lessons I was getting handed like some school child was that I didn’t know a fucking thing. Sure, I was well read and I could tease out tidbits and interpretations with the best of them. I could spend hours upon hours, combing through documents and books looking for the tiniest little thing that would help me leap forward a little further on this whole crazy fucking ride called life. But at the end of the day, with as much knowledge as I’ve gathered, I still don’t know shit.

I have realized that everything I had thought I had known about my religion, my path, my gods, my relationships, for fuck’s sake even my life was only a simple grain of sand in the desert of eternity. I had thought I had it figured out, mostly, but you know what? I didn’t have a damn thing figured out. I had blinders on and in order to really get to the nitty-gritty, I had to get those blinders ripped the hell off so I could truly see for the first time.

And what I saw was both beautiful and frightening.

I was transformed and remade and destroyed and put back together again. When that didn’t work out properly, I got to do it again. And when that way didn’t really work out, either, I had to do it again. When I got sick of doing that same old song and dance, I ended up being forced to do it against my fucking will because what I wanted didn’t have a damn thing to do with what that broke open head part of me needed. And I have had to keep transforming and changing everything I thought I had learned, everything I thought I knew and I have had to keep transforming myself with each new gush of that broke open head all just to incorporate yet more mind-boggling fuckery.

Sometimes, it’s almost like a euphoric, ecstatic moment where pain transcends into pleasure and then back again into pain. Sometimes, it’s almost like the darkest abyss filled with every frightening monster that hides in the dark, intent on destroying you utterly. In either case, you have to learn to deal with the shit going on around you while you feel like you’re ready to shatter for the millionth time into a thousand fucking pieces.

As that trickle turned into a steady gush, which in turn ended up as a waterfall with cascade effect like possibilities, I realized a lot of things about myself, my life, my path, my religion, my gods, my friendships, and everything in between. I’ve realized a million different details that were once thought impertinent really weren’t and the bits I thought were the most important have fallen to the wayside, completely forgotten. In the midst of that rubble, I learned the most important lesson of all:

At the end of the day, all the harshness of this new reality has made me realize that the transience of the now is only outweighed by the “bigger picture.” I’ve talked about it, tagged it in posts, and commented on it here and there. The bigger picture is the end result of all of this. While I find it difficult to order myself and my life and my path and my personal relationships and the relationships I’ve begun with my gods in a manner that may, one day, benefit that bigger picture, I know that it is what all of this broke open head business is about.

Even just writing those two words can cause such a multitude of emotions within me that I cannot even begin to describe them all: horror, joy, terror, calm, pain, ecstasy, etc. Even just those six words cannot do justice to what it all is to describe it in any attempt at detail.

At the end of the day, even with all of that emotional capacity tapped out and felt in one form or another, I have to admit that I’m just bitter tits about it all. At the end of the day, I sit down and I have to admit to myself that while being a part of something bigger may be nice for some people, at the heart of it all, I’m a selfish fuckface and bigger picture can really piss me off.

It’s only been a little over a year though since I get hit face first with the brick wall of bigger picture and I hear tell from other people that the bitter tits might wear off. I don’t know if that’s true, but I can hope that’s the case. The bigger picture I see is viewed through a lens smeared with Vaseline, but I’m assured by the gods that it looks pretty nice. I guess so; I’ll just have to take their word for it. 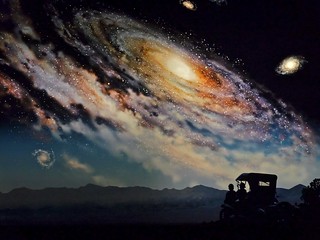 I remember what it was like all those years ago, looking in upon what must have been a spectacular tea party when people talked about their godphones and their broke open heads. I can remember knowing that I just wanted to be like them. I guess the real lesson in all of this is that “looks can be deceiving.” Or maybe, better still, the real fucking lesson is “be careful what you wish for.” I got my wish and I honestly, truly have to wonder if it was all worth it.

Maybe one day I can look back at all of this fuckery and say, “it was totally worth it.” But I’ll admit to harboring a fear that when that “one day” comes a-knocking, I’ll never be able to say that it was worth it but that I’ve hated every fucking minute of it and I rue the day I asked for all of this. Sekhmet tells me I won’t hate on it forever. She says it’s a good thing, but I honestly can’t tell if she’s just trying to get me to stop bitching about it all or if she really means it.

3 thoughts on “The Astral is Balls.”