I think I’ve been babied by how most of my interpersonal deity relationships have been in the last few years.

I talk about being a deity collector; I have a lot of deities that I pay homage to at any given time. Some of those relationships are more fleeting than others, which is how I am able to handle my shit without flipping my shit. Geb and Mut are prime examples: they do the “deity pop-in.” I only ever associate them with outdoors type shit so I don’t need to pay homage to them nearly as regularly as I do with other deities. Bes is only given attention when I’m at home and doing home and family centric things (pretty obvious with that one); Set gets attention when he’s told to send me a pick-me up; Anup gets attention when the akhu are involved. Hetheru, Djehuty, and the rest have all been so quiet since I flipped out on them for constantly pulling at me, trying to get me to do what they want when I had someone of larger importance already having led the fucking charge. In the end, while I do pay attention to those relationships that began when I was nervous and worrying about things, they’ve mostly gone the way of the Dodo.

Some of this is okay; the work with those deities was for Bigger Picture. I understand that now although I didn’t necessarily fully understand what that Bigger Picture was way back then. So, I had to learn to use heka effectively under the tutelage of Aset to prepare myself for the intermediary status I took on last year. I had to learn to write more effectively under Djehuty’s demands in order to make my heka more effective. Hetheru has always been there, waiting in the wings, until she felt I needed someone’s affection. (She counter balances the intensity of my relationship with Sekhmet by not being intense, at all, and not demanding anything from me except some fun periodically. She’s always kind of been a breath of fresh air.)

Thing is, they’ve all been relegated to household deities while things have seriously picked up with Sekhmet. I had made my choice; I wasn’t getting cake and eating it, too. They’ve quieted down and stopped asking things of me. I seem to have even lost that counterbalance with Hetheru, not as if it was a permanent addition to my life anyway. I don’t have the energy and wherewithal to give them any more than what I’m doing now: a daily offering, perhaps some words, the occasional, “hey, how are you,” and then I move on with my life. I was pleased and happy that I had been able to move from “active deity collector” back to “one track mind.”

Then Heru-Wer showed up and I’m beginning to flip my shit.

You see… I have never really had to learn the act of balancing relationships. 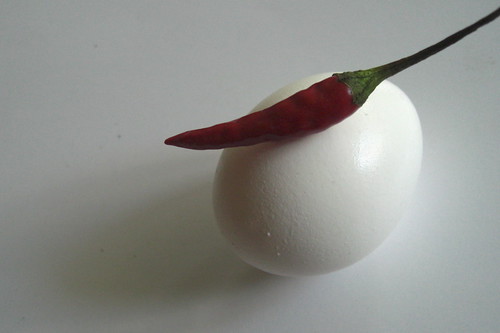 I am not very good at that whole thing. I talk a good game, but I’m very much a MUST HYPERFOCUS ON THIS THING RIGHT NOW BECAUSE REASONS and everything else falls to the wayside. This was the fundamental issue between Sekhmet and Hetheru. I always just assumed that Hetheru was around for a purpose and I strongly suspect she was only there as an escape when things would get really hard with Sekhmet. I don’t think I’ve necessarily burned the bridge, but I do think that she’s kept her distance for good reason. (I was a massive ass face when I made my decision last year.) The problem is that I don’t really seem to have that option here. Sekhmet is demanding and fickle; I bound myself to her and that is just simply what it is. However, as I’ve been looking more and more steadily into the mythology of Heru-Wer and wondering about what relationship we will have and figuring out what the fuck it’s going to entail, I’ve come to conclude that… well, he offers a really awesome balance point between HARDWORKHARDWORKHARDWORK and PLAYPLAYPLAY, which is something I need to fucking learn like yesterday.

How the hell do people do this? How in the world can you balance yourself out between two different deities that want two different things from you?

I got off scot-free, so to speak, and now I have to pay the piper. That’s… how it feels anyway. I was able to do my thing with Sekhmet and still do some things with other gods, but while it could suck at times, there was still something in the back of my mind that said I could run away if I needed to. I could walk away if I needed to. In the end, the decision was made for me anyway. The decision to end all intense relationships outside of Sekhmet’s was made and I have lived with that decision for almost a year now. I can’t tell anyone if it was a good one or a bad one, in all honesty. I think, with everything, it is shades of gray: I had to stop getting pulled in a million different directions and my loyalty was to Sekhmet first and foremost. Everyone else was cannon fodder for that Bigger Picture I was just harping about.

The problem is that I’ve been able to escape all of this learning curve. Perhaps because of my own inability to NOT be so single-minded about things, I never had to learn what it was like to actually balance a relationship with one deity and then learn how to add another. I tried it, sort of, when Hetheru joined Sekhmet in annoying the fuck out of me the beginning. And I found that I was so intensely focused on the various aspects of Hetheru that I couldn’t jump out of my head long enough to make that relationship more than an offshoot that was painful and frightening. Perhaps Hetheru knew something I didn’t back then: I wasn’t ready for this whole balance thing. In an effort to terminate that relationship, I have done everything in my power to push that particular goddess out of my life, too unwilling to stop long enough to think about other aspects of her that I needed/need to pay attention to. Instead, I have severed and strangled that connection to the point where it probably needs more than just mouth-to-mouth to resuscitate it.

That is my own stupidity, however; my own inability to work on the things that need to be worked on. I recognize that I have a lot of failings, by the way, and I know myself well enough (at least in this particular ball park) to know that I have a lot of fucked up shit that I have been very firmly ignoring. Sure, I look at it and I poke and prod at it occasionally, but what it comes down to is that all of the associations that Hetheru holds the keys to regarding that fucked up shit made it nearly impossible for me to do much more than to push her away. She got the hint long before I did, probably. I haven’t felt her since last year and then when I made my decision in October, I figured everything there was no longer available to me. Now, though, I have another deity in my life and I… well, I don’t want to be an asshole. I don’t want to strangle that connection until it is as dead as some of my other connections and relationships. I want…

I want to try it. I want to see where things will head, but I don’t necessarily know how to do it. I recognize that I have limitations; didn’t I just say that? I also recognize that there is a possibility here that is very frightening on a lot of levels. The possibility though is made more possible because I don’t have the issue with my head getting in my own fucking way. With Hetheru, as I said, I was too aware of her other associations to be completely comfortable with all of it. Heru-Wer doesn’t really have those types of associations, as far as I have found. He has associations with Hetheru (which is possibly where this randomness comes from), but the things that made me pull away from Hetheru aren’t necessarily there with Heru-Wer. That, in all honesty, makes it a lot easier for me to be willing to explore the realms I need to in order to move forward and I desperately want to.

Maybe it’s only now that I am fully aware of how fucked up my shit is and how much I need to, you know, actually work on it.

But I have to ask how people do this thing. I know of quite a few people who have intense relationships with various gods and they manage to work it out all right. They don’t seem to (in my limited view into what they do and who their relationships are with) have had the issue I have where the brain pan has been too busy fucking with them. And from what it looks like, while not easy, it seems feasible. I just don’t know if I have it in me to balance anything appropriately. I know myself too well: that thing about being hyper focused on things isn’t even remotely an exaggeration. I’m a Leo, for fuck’s sake; it’s in our nature to be like GIVE ME THE SHINY to the detriment of all else.

If nothing else, I can only hope it helps me…

4 thoughts on “The Art of Balance.”