This week, going into the services for this past weekend, I felt a little more grounded and a lot less anxious than I did in January. I think that’s because I had the January services under my belt. I have to admit that, even with my practice runs in November and December of last year, there was something daunting and terrifying about starting up the actual process in January. I’ve thought about the reason behind this and I have to assume it’s because the services I provided in November and December weren’t only just a practice run to me. It was a way for me to just kind of throw it out there and into the community and see what happened. And back then, even with the overwhelming amount of requests I received both times, I could always have just said, “Well, that was fun,” and stopped there. But once January came around, I didn’t have that “stopping” option anymore and I had to move forward.

This month, however, I felt that I was better prepared. I knew what expect, sort of, from the amount of requests that I would receive to what specifically I felt I needed in order to see the requests through. I also knew what to expect from the aftermath, as well. It may not be noticeable from the pictures that I post or the comments that I make, but this shit is draining. Since I’m not asking for anything in return and honestly wouldn’t want anything in return for this, I have to go at this based on whatever spoon allotment and energy reserves I have to function. Since I had given myself more time to prepare, knowing what to expect after the services had been completed, I was better able to budget myself the week before hand. To keep myself above the waves, so to speak, I added more calendar notifications throughout the week so that I knew when to start resting up and when I needed to ignore things going on around me so that I could better focus on the upcoming services I was planning.

As January’s services were about utilizing the New Year energy to promote goals for the petitions, February was a continuation of that goal. In January, a feast of blockages were provided to Sekhmet. She would eat whatever blocks she chose and help move people to the next step of whatever it was they were seeking. This month was a continuation of sorts to last month’s services. Only instead of just feasting on some blocks, we were requesting that Sekhmet aid people in punching through those walls and get to the other side. The goal was to ask that she provide her destructive energies for people to harness and bust through the blocks that were still there or that had recently accumulated after January’s services. And once I put the call out for people to submit requests, they came pouring in. 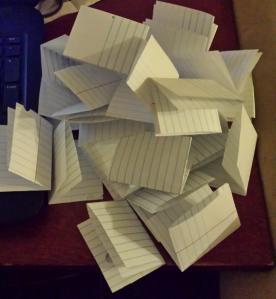 They kept falling off the table and just generally being all very unwilling to stay put.

In all honesty, I think I received more requests this months than I did last month. Or at least, it felt like that was the case. I received requests on various platforms open to people to put in those requests. And it took me about an hour of non-stop writing to create the petition papers that I use for these requests. I noticed that a lot of the requests that came in last month were more about the physical and the mundane than anything else. There were, of course, people requesting for things across the board, from the physical and mundane to the spiritual and the astral. What I noticed with this month is that a lot of people felt like they had walls to burst through regarding their religious and spiritual matters. The reason I mention this is because I hope that January’s services provided people the ability to destroy what was preventing them – the mundane in many cases – from seeking what they felt they needed in their spiritual lives. While this isn’t the case across the board as there were requests for mundane things to get destroyed this month, I thought it was definitely interesting that many more requests were more about spiritual levels.

Another reason I mention this is because of this Tumblr post that was going around yesterday. It seemed pretty timely that I provide the rites the night before and then, immediately, the next day, someone was asking about painful-yet-necessary rebirth processes the next day. I’m not saying that my services created that, by any means. But I do find it significant that many petition requests were regarding spiritual/religious blocks that, once broken through, would create a rebirth process for the petitioner. It’s probably just coincidence.

One of the staple offerings I buy for these are flowers. I love fresh cut flowers and if I had more vases and more space in my house for vases of flowers, I would probably go broke with the amount of flowers I would have. But Sat, someone is bound to say, why not have plants? Well, I have no window space to grow my own flowers and my yard is currently under about a foot and a half of snow. So, fresh cut flowers it is! When perusing the selections, I was hoping for something bright red to symbolize Sekhmet’s destructive capabilities. Unfortunately, or fortunately, my local grocery store didn’t have much in the way of red flowers. I did find a huge bouquet of yellow blossoms that kind of reminded me of fireworks. I liked the imagery since there were little white blooms in with the yellow ones. (I’m sorry, but I don’t remember flower names. They’re all pretty blooms to me.) And I thought that the yellow “firework” blooms would work pretty well for what I was trying to convey. After all, when I put out the request, my exact wording was, “bitch-slapping.” While fireworks and bitch-slapping aren’t quite the same, the imagery holds in my mind.

I decided to pare down the huge bouquet when I brought them home. I wanted to keep the three white roses that I still had on Sekhmet’s altar from the Feast of the Two Lands that I celebrated the week before. The white roses weren’t in the best of health, but that imagery, also, felt appropriate to me. It was like by adding the browning white roses to the firework yellow blooms, I was incorporating what the petitioners needed to get to the next step. A little of the old, mixed with the new, and we have a beautifully choreographed and over-filled vase of offerings ready to go.

For the meal portion, I chose to go with fruits again. I actually prefer to offer fruits to the gods for various reasons. A part of it is because fruits are very expensive. There are a lot of people who talk about eating healthy and everything, but the amount of fruits and vegetables that I can purchase for $20 is a hell of a lot less than the frozen meals that I can pick up for a buck a box. So, by offering fruits to the gods, it’s definitely a form of sacrifice for me especially since I’m not going to offering anything that I wouldn’t eat myself. Staple fruits are, of course, oranges, apples, and grapes. I didn’t add grapes to this month’s services since they weren’t on sale anymore, but I did purchase a delicious apple and a juicy orange to provide. I topped it all off with three jalapeños.

Another UPG I have of Sekhmet is that she really, really, really likes the spicy peppers. This isn’t actually all that surprising, I guess, because she tends to have a spicy flavor to her interactions. Part of the reason I incorporated jalapeños was because I wanted to give her something that I felt she would truly enjoy. However, I also wanted to incorporate the spiciness that stems from eating those types of peppers. I felt that by adding a spicier item than just my sweeter things, then it would behoove her to help people bust through with the fiery aftertaste of those peppers. I thought about giving her habanero peppers, but since I’ve never offered them before and I hear that the pepper shit can stick to your fingers hours afterward, I decided to stick with the usual jalapeños. Maybe never month, I’ll go for broke and check out those tiny little habanero peppers.

To top off the offerings, she got a broken up piece of her chili chocolate. 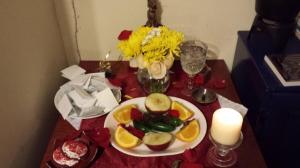 All set up and ready to go. And of course, rose petals everywhere because who doesn’t love rose petals?

I set everything up on her altar in a pleasing arrangement. On top of the bowl of petitions and the food offerings, I also pulled out the healing candle I had created in November of last year. I chose this candle in an effort to heal whatever destruction the petitioners may end up facing after the petition was over. This was to speed any healing that may be required after the blocks were broken up. I also chose this candle because I felt that I had overcompensated in using as much “bitch-slapping” imagery as I could. So, I wanted to mitigate any negative affects people would go through when the walls were broken open. As much as all of these busting open walls may need to come down, it can be daunting and quite painful, at times, to have it happen all at once. I was hoping that, at least, I could make things a tad bit easier for those that needed it.

After the rites were completed, I sat down in front of the altar and chattered at Sekhmet for a while. Since things have been picking up between us, I’ve found that our discussions are much less frequent. It seemed appropriate to discuss with her a lot of [personal] religious shit while waiting on her okay to blow out the candle to go to bed. I’ll admit that a lot of the discussion hinged on my insecurities regarding these services. While I felt quite calm, cool, and collected leading up to and during the services, I have to admit that it’s the after part that kind of gets to me. I never know if she’s going to bother to see any of the petition requests through. Of course, in same vein, I don’t know if any of the petitioners are going to get to work on whatever blocks/wall-breaking that need to be done, either. But since I don’t know if she’ll actually bother – and let’s just remind ourselves that this is the Lady of the Destruction, the Lady of Power, the Lady of I-Decide-What-To-Do-and-When-To-Do-It that we’re reaching out to – and that always kind of wears on me.

When I was finally finished with the whole thing, I had to admit that I felt much better about things. I can’t say if my conversation, or chattering, was what was needed here. Or if my pre-planning for much of the week beforehand left me feeling in better spirits. All I do know is that I didn’t feel as depressed or blank as I did after January’s services. Again, this could just be because of any number of things, but really, February’s aftercare, thus far, has been minimal. I’m a little shaky and overtired now, but that’s also after a full day of work and work-related bullshit, so you know, maybe I really am getting the hang of this.